The Office of the Chief oversees the day-to-day operations, balances demands for service and resources, and sets short term objectives and long term goals for the Police Department.

The Deputy Chief is responsible for the development of the Police Department budget. He works with the Command Staff to identify the operational needs, oversees special projects, and acts in lieu of the Chief of Police in his absence.

The Records section is responsible for the collection and retention of reports, citations, parking tickets, arrests, and all other data pertaining to the functions of the Police Department. Records staff are charged with maintaining the integrity and confidentiality of all documents to ensure the credibility of information in the administration of justice, from the point of police contact to the adjudication of cases in court. They are also responsible for the timely fulfillment of subpoenas, report requests, Freedom of Information Act (FOIA) requests, and any other internal or external requests.

Records personnel also provide service at the front desk in the public lobby, which includes walk-in customers in need of police service and general information.

The Communications Division understands the importance of good communication between our 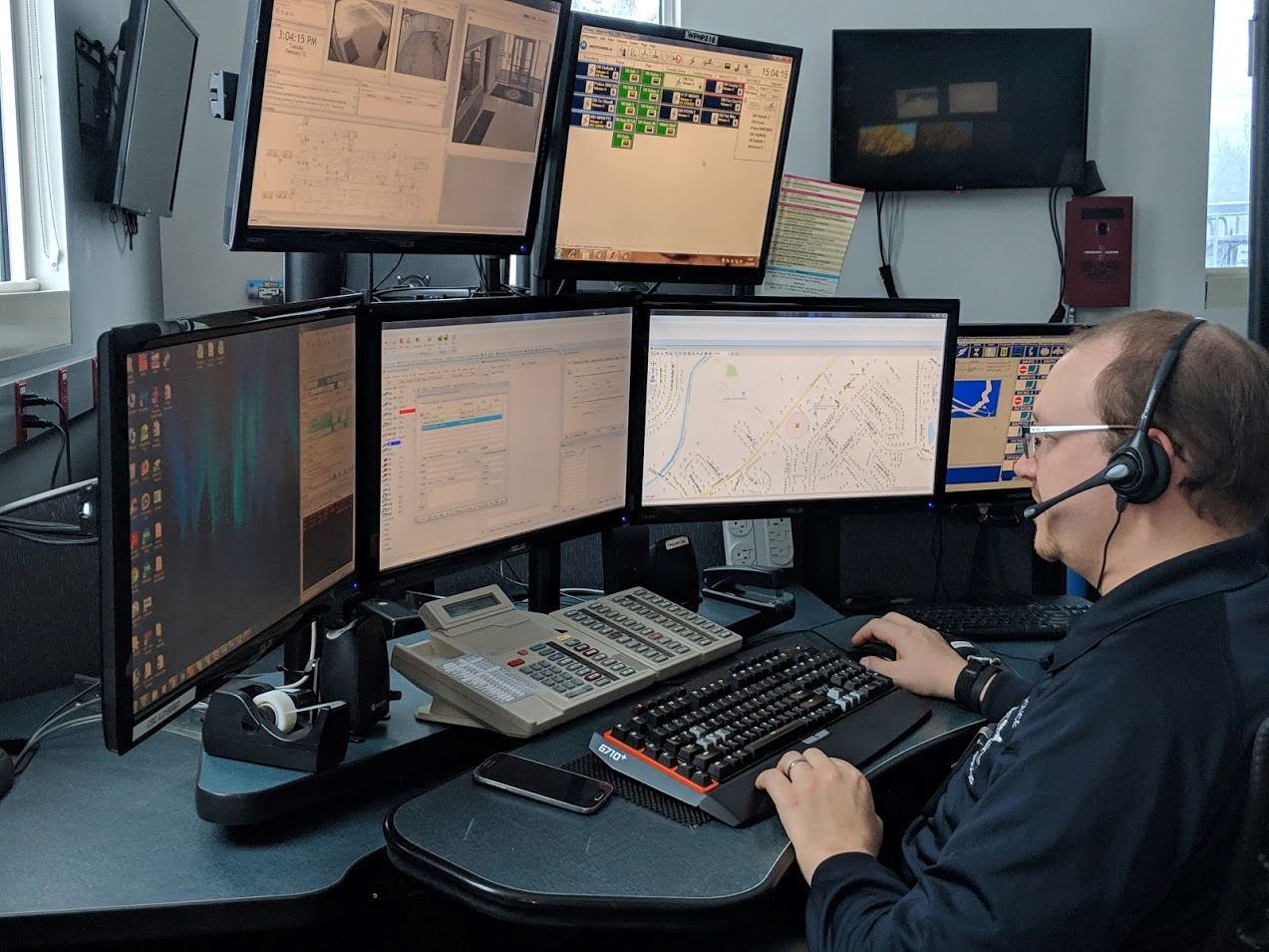 agency and the community we serve. The direct link between the public and our officers is the Telecommunications Center, which is staffed 24-hours a day, 7 days a week.

Their primary function is to receive, prioritize and assign calls for service to both Police and Fire departments. They are certified in Emergency Medical Dispatch (EMD) and are certified through the State of Illinois. They also monitor radio traffic for Public Works and the Fire Department as well as monitor all security cameras throughout the Police Department and the Municipal Building.

The School Resource Officer program is a cooperative effort betwe 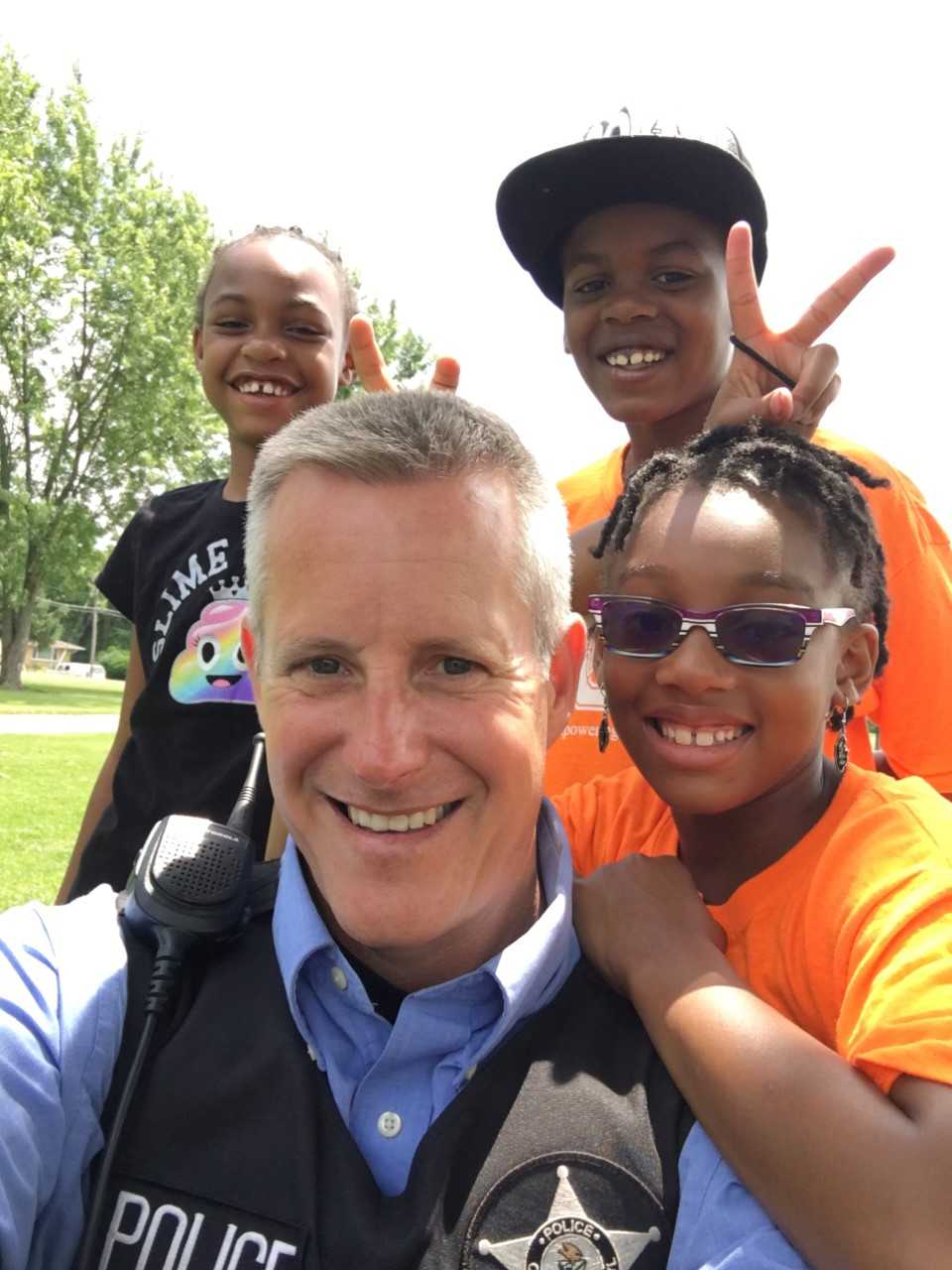 The School Resource Officer serves as a teacher, counselor, role model, and advocate for students, families, faculty and staff. The SRO is not the school disciplinarian, nor does he perform any other staff function. He brings full service, personalized policing to an important segment of our community. With a full time presence in the schools, he is an easily recognized and approachable resource for students.

These officers handle the majority of complaints requiring police action in the schools, and they interact with students and staff on non-criminal matters. They also are assigned to investigate criminal offenses committed by juveniles who are referred to the division and make determinations as to their disposition and referrals. They also investigate abuse cases committed against juveniles. The SRO is under the direct supervision of the Criminal Investigation Commander. He also works closely with the principals, dean of students, and school security officers.

The goals of the SRO are:

The Targeted Response Unit (TRU) consists of 1 Sergeant and 3 Patrol Officers. The Targeted Response unit's mission is to implement a proactive, problem solving initiative, consistent with the department's community oriented policing philosophy. TRU will address street crime and quality of life issues in order to improve public safety and enhance our overall quality of life.

TRU is also responsible for monitoring all registered sex offenders, parolees, individuals wanted on warrants, and gang members residing within the community. Additionally, TRU will be on the front line of proactive policing through the pursuit of known offenders, by initiating street level narcotics-related investigations, and supporting other Operations Bureau functions.

The Patrol Division continues to strive for service excellence as they deal with a wide variety of activity. In addition to handling calls for service and self-initiated activity, community policing remains a high priority with efforts concentrated on high visibility patrols and interaction with local businesses. Officers remain vigilant in preventing criminal activity as they patrol in cars, on motorcycles, foot and bicycles. Criminal and traffic law enforcement and accident investigation are just some of the areas that officers focus on each day. Preventing and displacing crime through walk patrols, bike patrols, business and vacation checks, all contribute to making the City of DeKalb a safer town.

The Patrol Section consists of 1 Commander, 11 Sergeants, and 37 Patrol Officers. Patrol shifts are 10 hours in duration and officers are assigned to 1 of 3 shifts. 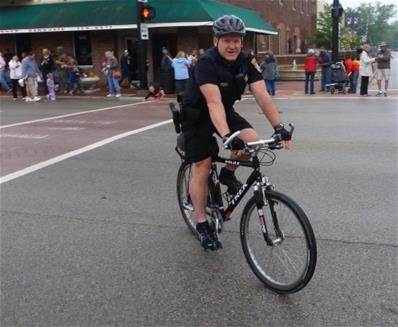 In the Spring of 2001, the DeKalb Police Department started a Bike Patrol program. Currently, 9 officers are assigned to this patrol with the days and hours varying. The officers received a week-long training covering bike safety, traffic laws, nutrition, bike maintenance, tactical moves, and various maneuvers to control the bike.

A Bike Patrol officer is more approachable when patrolling. The officer is encouraged to stop and talk to residents and establish an open and positive communication with the citizens. The Bike Patrol is especially effective during special events and parades. The bike officer can be on roadways and in parking lots providing patrol and still only be seconds away if needed to respond to a call.

There are many benefits in having a bike patrol:

In 2002 the DeKalb Police Department began a Community Service Officers (CSO) program. The CSO is a non-sworn part-time civilian member of the Police Department responsible for various functions within the department. They assist sworn officers by performing non-hazardous law enforcement duties that had traditionally been handled by sworn officers. Though still willing to provide a vast array of services to the community, sworn officers have the opportunity to concentrate their efforts on more serious problems.

The DeKalb Police Department has deployed a canine team to support 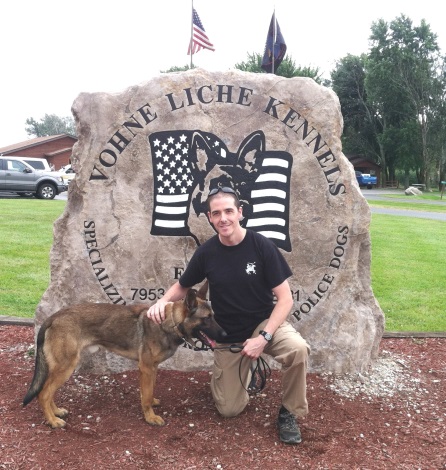 our Patrol Division. Officer Gates is assigned as the handler to our canine, Tach. Tach is a Belgian Malinois born in Slovakia and imported to the United States via Vohne Liche Kennels located in Denver, Indiana. Our canine team went through training at the Illinois State Police Canine Training facility. Tach is a dual purpose drug detection and patrol dog, trained in narcotics detection, handler protection, suspect apprehension, building and area searches, article searches and tracking.

The Domestic Violence Unit (DVU) was established in 2013 with establishing goals of reducing calls related to domestic violence, improving domestic violence investigations, working in concert with Safe Passage and the State’s Attorney’s office, and to increase intervention to prevent violence associated with domestic situations. The DVU reviews domestic reports and arrests, upgrades charges when necessary, and follows up with victims for orders of protection. The DVU also works with Safe Passage to provide roll call training for officers and to orient Safe Passage staff to relevant police procedures.

The Field Training Program is designed to prepare new officers to perform the essential duties of a police officer and to enhance the professionalism of the department through a contemporary, vigorous training system. The goal of the program is to produce a self-reliant police officer who is trained to modern professional law enforcement standards.

The training is structured as a 4 phase, 14-week program that prepares new officers in the various aspects of police work. The trainee rotates between 3 different Field Training Officers (FTO’s) during the 14-week program. The FTO’s provide a link between the Basic Law Enforcement Academy curriculum and the police performance expectations of the community and the department. The trainee also completes a week of training in the Investigation Division upon successful completion of training in the Patrol Division. The trainee also spends time working with the Telecommunicators and the School Resource Officer.

The trainees are oriented to the department and given instruction in city and county geography and jurisdictional boundaries. There is also instruction in the topics of community policing and ethnic diversity to enhance the trainee’s knowledge of these matters. The trainee interacts with other area law enforcement agencies and becomes familiar with the Northern Illinois University campus and its geographical boundaries. 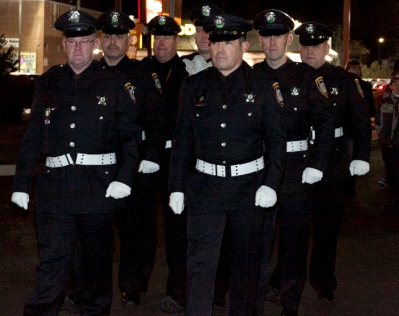 The DeKalb Police Department has an officer on the Illinois Law Enforcement Alarm System (ILEAS) Mobile Field Force. Realizing that individual departments cannot field a team of officers to handle major crowd control incidents ILEAS forged the Mobile Field Force, a contingent of police officers from ILEAS member departments, to handle such incidents. The officers from different police departments are equipped and trained through ILEAS to handle crowd control, protests and riots.

An officer is also assigned to the Weapons of Mass Destruction Special Response Team (WMD SRT). The WMD SRT teams are locally deployed SWAT teams that are specially trained and funded by ILEAS to deal with human threats in a hazardous materials environment. They often act as regional tactical assets for local agencies. 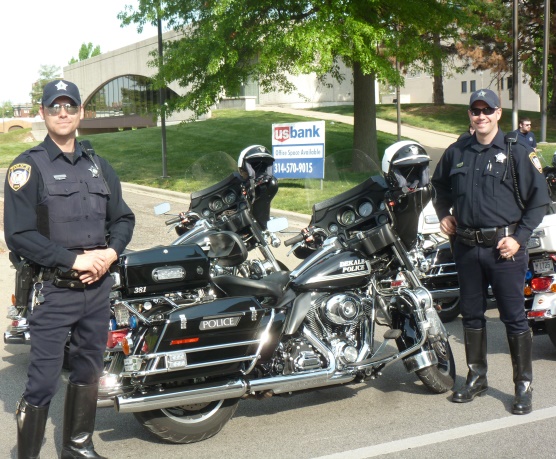 years since the department has had a Motor Unit. The Motor Unit is used for traffic enforcement, special events, and as a tool to interact with the public, especially children and youths. Traffic enforcement is stressed in high crash locations and in residential neighborhoods. These locations chosen will be where an officer in a marked police car would not be able to monitor traffic and take the necessary enforcement on traffic violations. Because of the unique characteristics of a motorcycle, its maneuverability, agility and size, officers have the ability to access many locations. Motorcycles offer the advantage of going places where a patrol car is unable to go.

Officers assigned to the Motorcycle Unit are known as motormen and attended an 80-hour course put on by the Northwestern University's Department of Public Safety and Harley-Davidson Motorcycles. Today, the department has 3 motormen.

The DeKalb Police Department announces the implementation of an enhanced Resident Officer Program (ROP) within the city. Successful in other communities such as Elgin and Oak Park, this will be a pilot program for DeKalb. The Resident Officer Program of DeKalb was created to improve the quality of life within individual neighborhoods in the City of DeKalb by assigning an officer to reside in designated neighborhoods and directly partnering with residents to find solutions to neighborhood problems.

The first area to be identified and staffed by the resident officer program was the public housing neighborhood located in the Lewis Court Apartments on North 14th Street, beginning in November 2004. An officer has resided at that location ever since, being equipped with a take-home marked squad car and given the responsibility of assisting with neighborhood issues both within the housing complex and the adjacent Pleasant Street neighborhood. He has performed these duties while remaining on a traditional patrol shift. An additional bilingual officer has assisted with neighborhood meetings in the area as well.

The enhanced ROP program placed a police officer in a city-owned home directly into the Pleasant Street neighborhood. The home, one that was in need of rehabilitation, was improved adding value to the neighborhood and improving its aesthetic qualities. This ROP officer is not only a point of contact for policing problems, but will also be able to reach out to other agencies in an attempt to solve whatever problems may be facing the neighborhood.

Objectives of the ROP officer include: 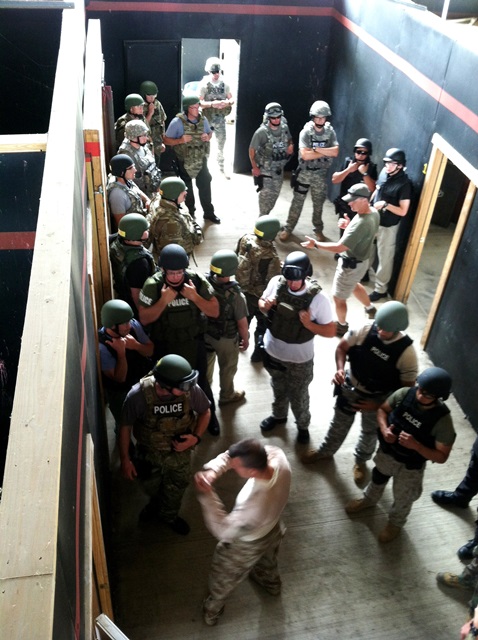 perations Team (SOT).  The DeKalb Police Department, Sycamore Police Department, and the DeKalb County Sheriff's Office implemented a joint Special Operations Team providing a tactical response to critical incidents in DeKalb County. The presence of a highly trained and skilled law enforcement tactical unit at critical incidents has allowed for the resolution of critical incidents while mitigating the risk of serious injury or death to citizens, law enforcement and suspects.  The agencies involved in SOT recognize the benefits of a well-managed "team response" and the effect the multi-jurisdictional team has a force multiplier that enhances the participating agencies' abilities to resolve high risk situations in a safe manner.